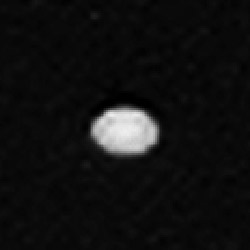 Despina is the third moon of Neptune in order from the planet. Despina was discovered by the Voyager Imaging Team in July 1989. It is named after one of the daughters of Poseidon and is also known as Neptune IV. Despina is irregular in shape, and orbits just 27,700 km (17,200 mi) above the cloud tops of its primary. Like the five other inner moons discovered during Voyager 2's 1989 flyby of Neptune, Despina is among the darkest objects known.