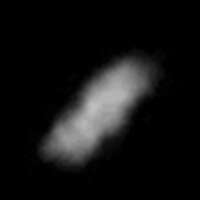 Naiad from Voyager 2. The elongation is due to smearing of the image.

Naiad is the innermost moon of Neptune. It was discovered by the Voyager Imaging Team in September 1989. It is named after the Naiads (nymphs) of Greek legend and is also known as Neptune III. Naiad is small object of irregular shape, which orbits just 23,200 km (14,400 mi) above the Neptunian cloudtops.