Giant plumes of ice are seen erupting in this mosaic of images captured by Cassini during a flyby of Enceladus in November 2009. 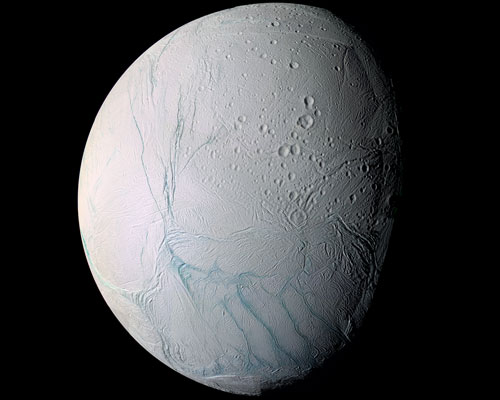 Enceladus as seen by the Cassini spacecraft on July 14, 2005. This false-color, mosaic view of the hemisphere facing away from Saturn was made from 21 narrow-angle camera images taken at ultraviolet to infrared wavelengths. In false-color, many long fractures on Enceladus show a marked difference in color (represented here in blue) from the surrounding terrain. The original images range in resolution from 350 to 67 m (1,148 to 220 ft) per pixel and were taken at distances ranging from 61,300 to 11,100 km (38,090 to 6,897 miles). (NASA/JPL.) 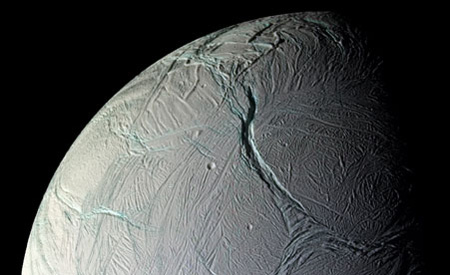 The mosaic of fractures, folds and ridges in the surface of Enceladus, captured by Cassini. (NASA/JPL/Space Science Institute.) 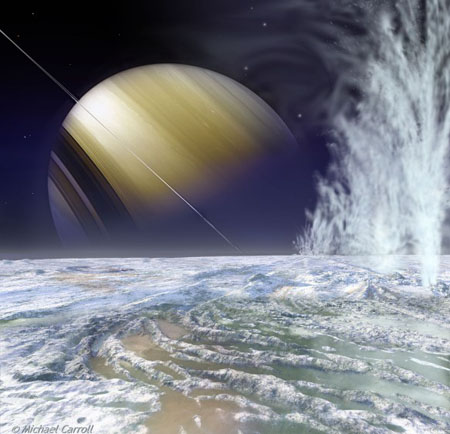 Enceladus is the sixth largest moon of Saturn, discovered by William Herschel on August 28, 1789. It is also known as Saturn II. Enceladus has attracted much interest recently because of the icy plumes that have been seen erupting from cracks near the moon's south pole. These emanations hint at the existence of a body of water just below the surface, which in turn encourages speculation about the possibility of life. Enceladus is one of only three worlds in the Solar System in which active eruptions have been observed (the others being Io and Triton).

Enceladus orbits within Saturn's tenuous, outermost ring, the E-ring. The surface coating of pristine ice makes it the most reflective object known in the solar system. It is also the most geologically evolved member of Saturn's satellites, displaying a young surface with at least five distinct types of terrain. Even the most heavily cratered areas of Enceladus are much more lightly pock-marked than the other icy satellites, while some regions are crater-free down to a resolution of 2 km (1.2 miles), indicating that the surface has undergone major change within the last 1 billion years, and has been geologically active within the last 100 million years. On either edge of the ridged plains, a series of truncated craters indicate that melting of the surface occurred after the end of the intense bombardment phase. Linear markings in the southern hemisphere are rectilinear fault lines associated with movement of the crust. Other, curved lines appear to be a complex system of ridges, similar to the grooved terrain on Ganymede.

All of this suggests that Enceladus must have an interior that is kept in a liquid state. But how? One possibility is tidal heating due to the gravitational effects of Saturn and the large, neighboring moons Dione (with which Enceladus is locked in a 1:2 resonance) and Tethys. Many researchers, however, fail to see how tidal heating could be a major factor because the orbit of Enceladus is not sufficiently elongated (eccentric). A question mark hangs over other possible heating mechanisms, too. Enceladus doesn't have enough interior rocks for radioactive heating, nor does it have enough ammonia to lower its melting temperature.