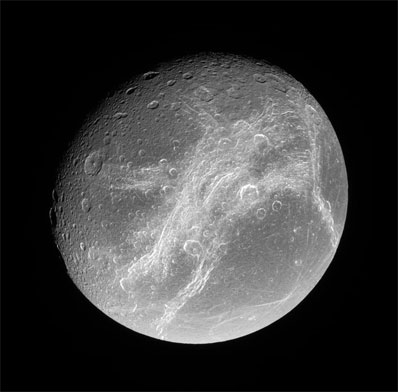 Fig 1. Cassini image of trailing hemisphere of Dione showing the moon's complex of bright cliffs. At lower right is the feature called Cassandra, exhibiting linear rays extending in multiple directions. North is up. The image was taken in polarized green light with Cassini's narrow-angle camera at a distance of approximately 263,000 km (163,000 mi). Image scale is 2 km (1 mi) per pixel. Credit: NASA/JPL/Space Science Institute. 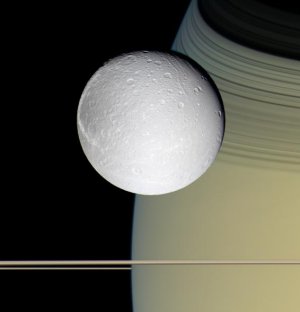 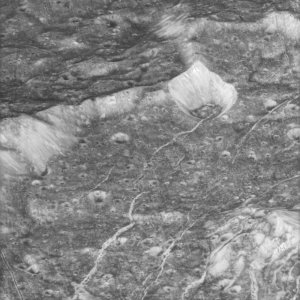 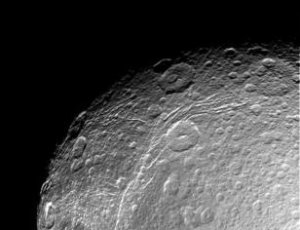 Dione is the fourth-largest moon of Saturn and the third densest after Titan and Enceladus. It was discovered on March 21, 1684, by Giovanni Cassini and is also known as Saturn IV.

Dione's relatively high density suggests that it has a rocky core, making up about one third of its total mass, surrounded by water ice. In composition, albedo, and terrain, it is similar to Rhea. Both moons have markedly different leading and trailing hemispheres. The surface includes heavily-cratered terrain, moderately cratered plains, lightly cratered plains, and bright, wispy material. The heavily-cratered regions feature craters of all diameters up to and exceeding 100 km (60 mi), whereas the plains areas tend to have craters no larger than about 30 km across.

Contrary to what might be expected of a satellite in gravitational lock, it is the trailing hemisphere of Dione on which the majority of intense cratering exists. This suggests that, during the early period of heavy bombardment in the solar system, Dione was tidally locked to Saturn in the opposite direction to which it now spins. Subsequent major collisions with any objects large enough to cause craters more than about 35 km (21 mi) in diameter, of which there are many on Dione, would have been capable of altering the rate and direction of the moon's rotation. The likelihood is that Dione has been tidally locked in its current state for several billion years judging by the average albedo of the leading and trailing hemispheres. The albedo decreases from the leading to the trailing hemisphere since the former has suffered a higher rate of micrometeorite impacts. Streaks of bright material which interlace a dark portion of the surface are of uncertain origin but may be fractures associated with faults through which water has upwelled.

The text below, and accompaning images, are from NASA's Planetary Photojournal.

Fig 2. Speeding toward Dione, the Cassini spacecraft's view is enriched by the gold and blue hues of Saturn in the distance. The horizontal stripes near the bottom of the image are Saturn's rings. The spacecraft was nearly in the plane of the rings when the image was taken, thinning them by perspective and masking their awesome scale. The thin, curving shadows of the C ring and part of the B ring adorn the northern latitudes visible here. It is notable that Dione, like most of the other icy Saturnian satellites, looks no different in natural color than in monochrome images. Images taken with blue, green and infrared (centered at 752 nm) spectral filters were used to create this color view, which approximates the scene as it would appear to the human eye. The images were obtained with the Cassini spacecraft wide-angle camera at a distance of about 39,000 km (24,200 mi) from Dione and at a Sun-Dione-spacecraft angle of 22°. The image scale is about 2 km (1 mi) per pixel.

Fig 3. This close-up view of icy Dione reveals a wide variety of surface features that are simultaneously familiar and unlike any other place in the solar system. The terrain in this image is located within a 60-km-wide (37-mi) impact crater along the feature called Padua Linea. The western rim of the encompassing crater runs from the middle left to the upper right. The crater's central peak can be seen at the lower right. Multiple generations of fractures are visible here. Numerous fine, roughly parallel linear grooves run across the terrain from top to bottom and are interrupted by the larger, irregular bright fractures. In several places, fractures postdate some deposits in the bottoms of craters that are not badly degraded by time. Such a fracture, for example, runs from the center toward the upper right. Most of the craters seen here have bright walls and dark deposits of material on their floors. As on other Saturnian moons, rockslides on Dione may reveal cleaner ice, while the darker materials accumulate in areas of lower topography and lower slope (e.g. crater floors and the bases of scarps). This view is centered on terrain near 11° S latitude, 238° W longitude. This clear-filter image was taken using the Cassini spacecraft narrow-angle camera, during Cassini's close targeted flyby of Dione. The image was acquired from a distance of 4,486 km (2,787 mi) from Dione and at a Sun-Dione-spacecraft angle of 10°. The image scale is 23 m (75 ft) per pixel.

Fig 4. This high resolution view of Saturn's moon Dione was taken during Cassini's first close approach to the icy moon. The view shows linear, curving features within the region of the bright wispy terrain Dione is known for. The image was obtained in visible light with the Cassini spacecraft narrow angle camera at a distance of approximately 156,000 km (97,000 mi) from Dione. The Sun-Dione-spacecraft angle is 34°. The image scale is about 1 km (0.6 mi) per pixel.