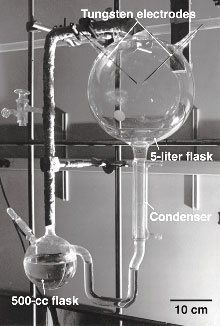 Apparatus used in the Miller-Urey experiment.

Diagram of the Miller-Urey apparatus.

The Miller-Urey experiment, conducted in 1953 by Stanley Miller under the supervision of Harold Urey, was the first experiment to test the Oparin-Haldane theory about the evolution of prebiotic chemicals and the origin of life on Earth.

A mixture of methane, ammonia, hydrogen, and water vapor, to simulate the version of Earth's primitive, reducing atmosphere proposed by Oparin, was introduced into a 5-liter flask and energized by an electrical discharge apparatus to represent ultraviolet radiation from the Sun. The products were allowed to condense and collect in a lower flask which modeled a body of water on the Earth's surface. Heat supplied to this flask recycled the water vapor just as water evaporates from lakes and seas, before moving into the atmosphere and condensing again as rain.

After a day of continuous operation, Miller and Urey found a thin layer of hydrocarbons on the surface of the water. After about a week of operation, a dark brown scum had collected in the lower flask and was found to contain several types of amino acids, including glycine and alanine, together with sugars, tars, and various other unidentified organic chemicals.