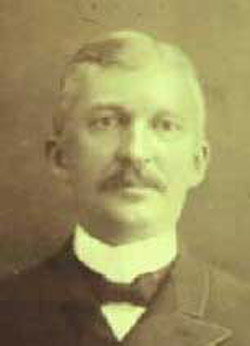 James Keeler was an American astrophysicist, probable discoverer of the dark narrow gap in the outer part of the A ring of Saturn while he was head of the Allegheny Observatory (1891–98), and the second director of Lick Observatory (1898–1900).

Keeler was (it seems accidentally) cheated of his rightful fame when the A ring gap became known as Encke's Division. Johann Encke had earlier seen a broad, poor contrast feature in the A-ring (now called the Encke Minimum) which is quite different from the sharp, distinct gap that Keeler recorded on the very first night of observing with the Lick 36-inch refractor. On the other hand, the gap may have been seen even earlier by Francesco De Vico, William Lassell, and William Dawes. In 1895 Keeler made a spectroscopic study of Saturn and its rings in order to explore its period of rotation. He found that the rings did not have a uniform rate of rotation, thus proving for the first time that they were not solid and corroborating James Clerk Maxwell's theory that the rings are composed of meteoritic particles.

After 1898, using the new Crossley reflecting telescope at Lick, Keeler's attention was focused on the study of the nebulae in William Herschel's hundred-year-old catalogue of which he managed to photograph half. During the course of his work he discovered many thousands of new nebulae and revealed their close relationship to stars.