filament (on the Sun) 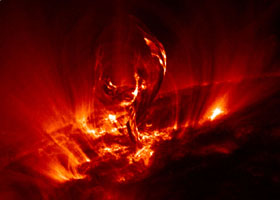 A filament is a strand of relatively cool gas suspended by magnetic fields over the solar photosphere so that it appears as a dark line over the Sun's disk. A filament on the limb of the Sun seen in emission against the dark sky is called a prominence. Filaments often mark areas of magnetic shearing and can be seen only in the centers of strong spectral lines, such as H-alpha or the H and K lines of calcium.