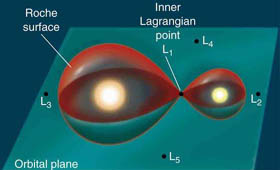 The Roche lobe the volume around a star in a binary system in which, if you were to release a particle, it would fall back onto the surface of that star. A particle released above the Roche lobe of either star will, in general, occupy the circumbinary region that surrounds both stars. The point at which the Roche lobes of the two stars touch is called the inner Lagrangian point. If a star in a close binary system evolves to the point at which it fills its Roche lobe, calculations predict that material from this star will overflow both onto the companion star (via the L1 point) and into the environment around the binary system.