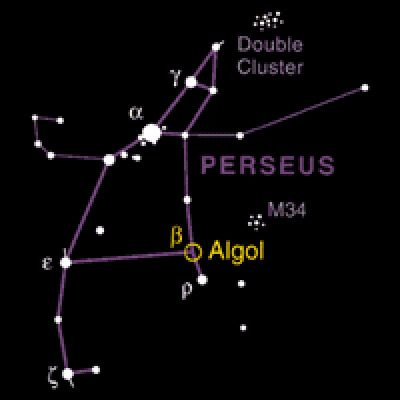 The constellation Perseus and location of Algol. 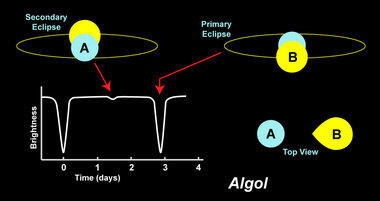 Algol (Beta Persei) is a multiple star system in the constellation Perseus. Its Arabic name means "Demon Star", apparently a reference to its peculiar behavior. Algol (Beta Persei) seems to wink slowly, fading for almost 5 hr, reaching a minimum brightness for about 20 min, and then gradually returning to its maximum brightness before starting the whole 2.87-day cycle again. Its variability was cited in a 1783 paper by William Herschel as evidence of a planet in orbit about the star. However, William Whewell, in his attack on pluralism in 1853, argued that if the variability were due to an eclipsing companion then this body would have to be much larger than a planet. John Goodricke was the first to realize its true nature.

Algol is now known to be an eclipsing binary, consisting of a larger (3.5-solar-radius) but fainter subgiant K star and a slightly smaller (3-solar-radius) but brighter B star in orbit around each other. The fast decline in brightness takes place as the K-type component moves in front of and blocks out the light from its brighter partner. The 20-minute minimum corresponds to the period when the B-type star is completely eclipsed. A secondary eclipse takes place when the positions of the stars are reversed, but because the B-type is responsible for the bulk of the combined light output and can only blot out a fraction of the larger star's disk, this results in hardly any reduction in brightness. A third, more remote star exists in the Algol system, with a period of 1.87 years, which does not take part in the eclipses.