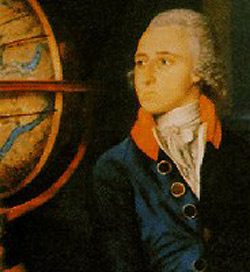 John Goodricke was a Dutch-born English amateur astronomer who, despite a short life and the handicap of being deaf and mute, did important early work on variable stars. Encouraged in this field by his neighbor, Edward Pigott, Goodricke determined the period of Algol and explained, in 1782, its behavior in terms of an eclipsing binary system – a suggestion that was confirmed a century later. Goodricke's discovered the variability of Beta Lyrae and of Delta Cephei in 1784, but then died at the age of 21 after a bout with pneumonia which he reportedly caught while observing Delta Cep.