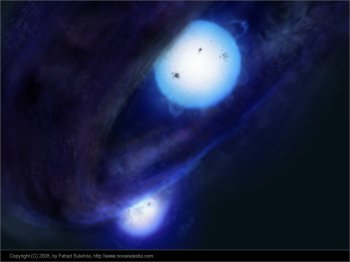 The components of Beta Lyrae are so close that they almost touch. Although they cannot be seen separately and are surrounded by complicated gas clouds, it is known that they must be egg-shaped because of their nearness. Unlike Algol, Beta Lyrae is always varying – there are two minima, one of magnitude 3.8 and the other 4.3, taking place alternately. The maximum magnitude is 3.4 and the period is 12.9 days.

Beta Lyrae is the prototype for a remarkable class of interacting eclipsing binary star (see Beta Lyrae stars). Its proper name, Sheliak, comes from an Arabic word for "harp," the constellation (Lyra) in which the star lies.

Beta Lyrae is a close binary of the semi-detached variety, consisting of a B star, which is the visible component, and another but much more massive (about 12 solar masses) main sequence star that is largely obscured by a thick accretion disk of material that has been lost by the smaller star. The plane of the orbit is pitched so that, from our vantage point, each star passes alternately in front of the other. The bigger star completely eclipses its companion every 12.9 days (giving a primary minimum of magnitude 4.3) and, 6.5 days later, the companion blocks some of the giant's light (causing a secondary minimum of 4.8). In addition, being massive and very close together, the two stars have pulled each other into an egg-shape so that Beta Lyr, and systems like it, are not only eclipsing but also ellipsoidal variables. Beta Lyr's light changes, easily visible to the naked eye by comparing the star to others in the constellation, were first noted by John Goodricke in 1784.