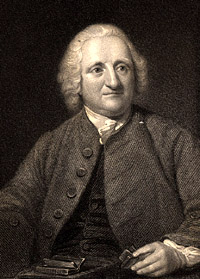 John Dollond was an English optician who introduced achromatic lenses for telescopes and microscopes. A London-born son of immigrant Huguenots from France, Dollond took up the weaving trade of his father, but at the age of 46 joined his son Peter in the optical business. In 1752 he became involved in a controversy over the question of whether Isaac Newton had been correct in asserting that it was not possible to combine two lenses of different materials to obtain an achromatic lens (a lens that focuses all colors of light equally). Even though Dollond was supposedly an uneducated optical worker, he stood up to Leonhard Euler, one of Europe's most learned mathematicians. And when he did experiments with prisms of different materials he proved Newton wrong by demonstrating that a prism combination could be found that gave refraction without dispersion. This opened the door to making greatly improved telescopes. By combining two lenses with the proper curvatures, one of crown glass and the other of flint glass, he and his son could make telescope objectives that didn't have the usual blurring that results from a variation of the focal length with color.

There was a controversial claim that, in 1729, an English barrister named Chester Moor Hall had designed the first achromatic lens and that Dollond may have known about it. However, Hall never submitted a claim for his invention nor did he attempt to publicize it, and there is no doubt that Dollond was the first to make successful achromatic telescopes in quantity and offer them commercially. The firm of Dollond & Son became the preeminent English telescope-makers and telescopes made by them went to all parts of the world. After John died in 1761 the business flourished through four more generations of Dollonds. In 1871 the business went out of the family but continues to this day as Dollond & Aitchison.