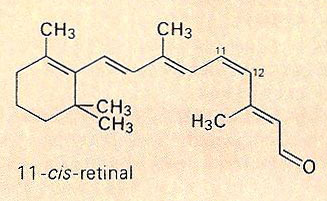 Fig 1. Rhodopsin comprises a species specific protein, opsin, conjugated with the 11-cis-isomer of retinal. On bleaching in light, the retinal is released as the all-trans-isomer. 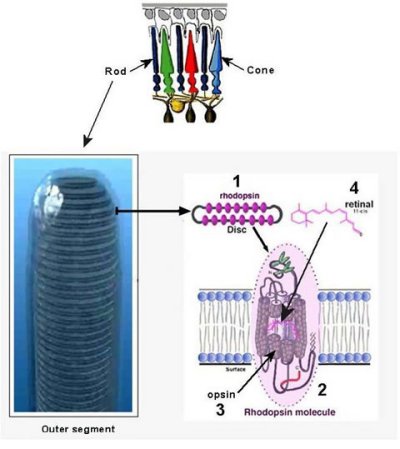 Rhodopsin, also known as visual purple, is a widely distributed pigment concerned with light sensitivity. It consists of a protein called opsin with a prosthetic group called retinal of which vitamin A is an essential precursor (Fig 1). Rhodopsin occurs in the rod cells of vertebrate retinas (Fig 2). It is chemically changed by the light, the change being the basis of how rods work as light-sensitive receptors. Rhodopsin increases in amount in the dark, raising the sensitivity of rods to faint light (the dark adaptation).

Retinal is the key molecule involved in vision. It is a crystalline pigment, C19H27CHO, and a component of rhodopsin. Also called retinene, it is the aldehyde of vitamin A.