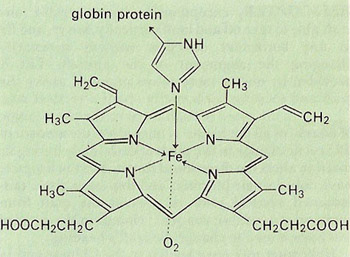 Heme, C34H32FeN4O4, is a subunit of the hemoglobin molecule. It consists of an organic part, called protoporphyrin IX, and an iron atom. The organic part is made up of four rings that are linked together to form a tetra structure. The iron atom is in the center of the four rings and binds to oxygen. Structurally it resembles hematin with the iron in the Fe(II) state and with no chlorine. Heme combines with the protein globin to form the blood pigment hemoglobin.

Heme serves as the prosthetic group of hemoglobin, of cytochromes, and of some peroxidases. The iron may be oxidized to Fe(III) during reactions involving cytochromes or peroxidases, i.e. it becomes hematin.