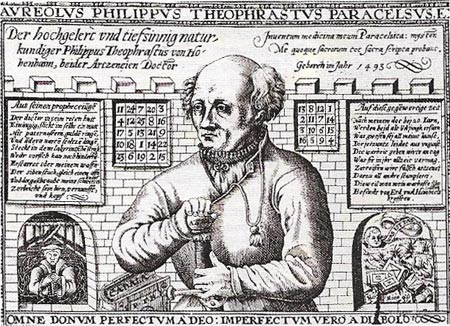 Paracelsus broke with the traditions of Galen and revolutionised medical methods. Expelled from his post at Basel University in 1528, he continued with pharmaceutical experiments and encouraged research and development. He started the treatment of venereal disease by mercury and believed that the physician should be alchemist, astrologer and theologian in order to tend the body, soul, and spirit.

Philippus Paracelsus was a Swiss alchemist and physician who channeled the arts of alchemy toward the preparation of medical remedies. Born Theophrastus Bombast von Hohenheim, he adopted the name Paracelsus, apparently to imply that he was greater than Celsus.

Paracelsus was the son of Wilhelm Bombast von Hohenheim, physician at Einsiedeln, in the Swiss canton of Schwyz. He owed his earlier education mainly to his father; went to Basel University at the age of 16, but soon left to study alchemy and chemistry with Trithemius, Bishop of Würzburg; and next at the mines of Tyrol belonging to the Fugger family learned about the physical properties of metals and minerals, and the disposition of rock strata, and began to realize that the observation of nature is more important to the student than academic prelections. Here, and in subsequent wanderings over much of Europe, he amassed a vast store of facts, learned the actual practice of medicine amongst various peoples, but lost all faith in scholastic thought. He became well known as a medical practitioner, and on his return to Basel in 1526 was appointed town physician. He also lectured on medicine at the university, but defied academic tradition not merely by lecturing in German (not Latin), but by disputing the teachings of Galen and Avicenna.

Bitterness, backbiting, and enmity soon arose and followed him throughout the rest of his life, aggravated and justified in part by his own vanity, arrogance, and aggressiveness. A dispute with the magistrates in 1528 led to his leaving Basel; he then wandered for more than a dozen years, visiting Colmar, Nuremberg, Zurich, Augsburg, and many other towns, but seldom staying anywhere more than a few months, and at last settled in 1541 under the protection of the archbishop of Salzburg. But he died in the same year – murdered by his enemies, said his friends; as a result of a drunken debauch, said his enemies.

He was a perpetual challenge to everything that was academic: for example, he was the first man to recognize an industrial disease. There are both grotesque and endearing episodes in the undaunted, lifelong battle Paracelsus fought with the oldest tradition of his time, the practice of medicine. His head was a perpetual fountain of theories, many of them contradictory, and most of them outrageous. He was a Rabelaisian, picaresque, wild character, drank with students, ran after women, traveled much of the Old World, and until recently, figured in the histories of science as a quack. But that he was not. He was a man of divided but profound genius.

The point is that Paracelsus was a character. We catch in him, perhaps for the first time, the transparent sense that a scientific discovery flows from a personality, and that discovery comes alive as watch it being made by a person. Paracelsus was a practical man, who understood that the treatment of a patient depends on diagnosis (he was a brilliant diagnostician) and on direct application by the doctor himself. He broke with the tradition by which the physician was a learned academic who read out of a very old book, and the poor patient was in the hands of some assistant who did what he was told. "There can be no surgeon who is not also a physician," Paracelsus wrote. "Where the physician is not also a surgeon he is an idol that is nothing but a painted monkey."

Such aphorisms did not endear Paracelsus to his rivals, but they did make him attractive to other independent minds in the age of the Reformation. That is how he came to be brought to Basel for the single year of triumph in his otherwise disastrous worldly career. In Basel in the year 1527 Johann Frobenius, the great Protestant and humanist painter, had a serious leg infection – the leg was about to be amputated – and in despair appealed to his friends in the new movement, who sent him to Paracelsus. Paracelsus threw the academics out of the room, saved the leg, and effected a cure which echoed throughout Europe. Erasmus wrote to him saying: "You have brought back Frobenius, who is half my life, from the underworld."