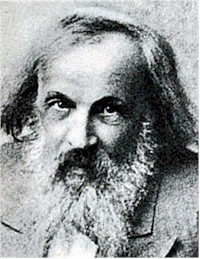 Dmitri Mendeleyev was a Russian chemist who devised the periodic table. Mendeleyev demonstrated that chemically similar elements appear at regular intervals if the elements are arranged in order by relative atomic mass. He classified the then 60 known elements and left gaps in the table, predicting the existence and properties of several unknown elements later discovered, including gallium and scandium. His work was first published in Russian in 1869, and was soon translated. His textbook, The Principles of Chemistry, was written between 1868 and 1870, and translated in 1905, rapidly becoming a standard work. The element mendelevium is named after him.