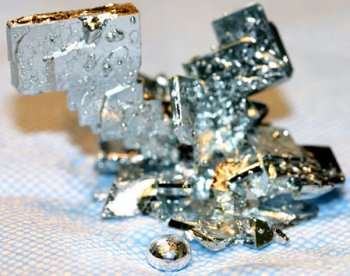 Gallium (Ga) is a silvery-white metallic element of group IIIA of the period table, resembling aluminum. It is found as a trace element in bauxite, pyrite, sphalerite, and germanite. Gallium has such a low melting point that it will enter a molten state if held in the hand and will then remain liquid when cooled down to 0°C. If, however, a globule of molten gallium is touched with a fragment of the solid metal, below its melting point, it will immediately solidify. Gallium is used in lasers, transistor semiconductors, and high-temperature thermometers.

Gallium was discovered using spectroscopy by P. E. Lecoq de Boisbaudran in 1875 in a zinc blende found in the Pyrenees; its name is derived from Gallia, the Latin name for France. However, its properties and salts were predicted before its discovery by Dmitri Mendeleyev based on his Periodic Law. Because it occupied a space immediately below aluminum according to that law he suggested the name "eka-aluminium" for it.

Gallium arsenide (GaAs) is a rival material to silicon for making semiconductor chips. GaAs chips process data faster using less power than silicon chips, but it is not possible to mass produce them as reliably. Sometimes known as "three-five" material (because gallium has a valence of 3 and arsenic of 5) or a binary semiconductor (being a compound of two materials).