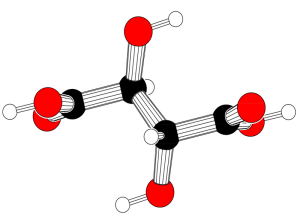 Tartaric acid is a white, crystalline, optically active carboxylic acid, also known by the systematic name 2,3-dihydroxybutanedioic acid, which occurs in fruits. It has the chemical formula (CHOH)2(COOH)2 and three stereoisomers. Tartaric acid can be made from maleic anhydride and hydrogen peroxide or by enzyme action on succinic acid.

Tartaric acid is widely used in baking powder, cream of tartar, soft drinks, and in the textile industry. It has a relative density of 1.76 and a melting point of 171°C (340 °F).

Salts or esters of tartaric acid. Tartrates, such as potassium bitartrate (cream of tartar) and sodium bitartrate, are used in baking powder, in the food industry, and in tanning.