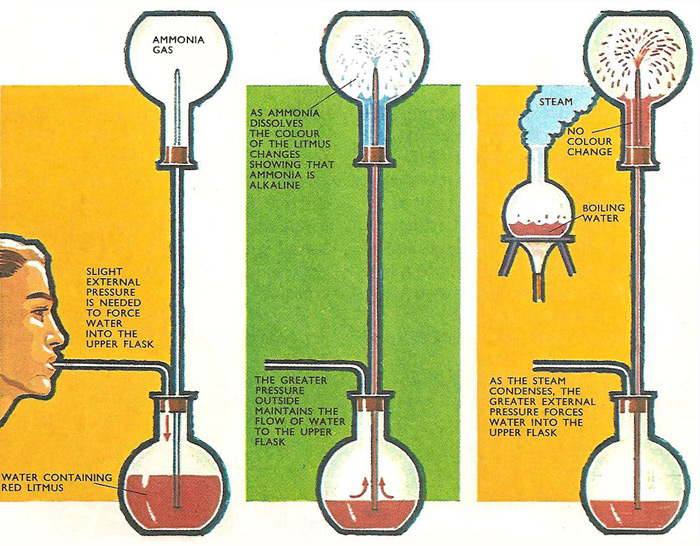 Fig 1. Once the water has entered the flask containing ammonia (left) the flow of water continues without further assistance. As the ammonia dissolves, the pressure of the gas in the flask drops. The greater pressure of the atmosphere makes more water rush into the flask. A similar effect is observed with a flask full of steam (right), but here the pressure falls as the steam cools. 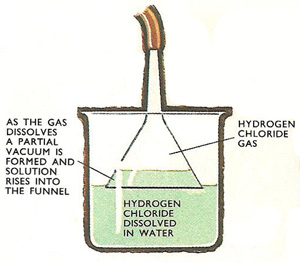 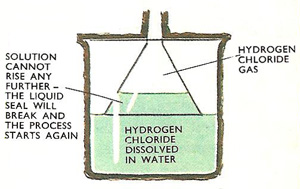 Both ammonia and hydrogen chloride are very soluble in water. In fact at 15°C water will absorb 800 times its own volume of ammonia at normal atmospheric pressure. Their high solubility may be demonstrated in a quite spectacular way by the fountain experiment, so called because a fountain of water droplets rushes into the flask which contained the gas.

As soon as the first drops of water enter the flask, so ammonia gas starts to dissolve, and the pressure of the remaining gas drops immediately. This creates a partial vacuum and in an effort to balance the pressure inside and outside the flask, the pressure of the atmosphere forces more water into the flask. Soon, all the ammonia will have dissolved and the flask becomes almost full of water.

If a few drops of red litmus were put in the lower flask at the start of the experiment, the color of the water would change to blue as soon as it entered the upper flask and ammonia to dissolves to form an alkaline solution.

However, if the experiment were performed using hydrogen chloride gas (or sulfur dioxide), blue litmus would be added to the lower flask and this changes to red on reaching the upper flask, so showing that the solution is acidic. Hydrogen chloride is not so soluble as ammonia – at 15°C water will absorb only 458 times own volume of the gas. Under the same conditions water absorbs 47 times its own volume of sulfur dioxide.

The fountain experiment will also work if the upper flask is filled with steam or hot air instead of ammonia. In this instance, however, the pressure difference, which makes the fountain of water droplets rise into the upper flask, is caused by the contraction of the hot gases as they cool down.

Hydrochloric acid is a solution of hydrogen chloride in water, but as hydrogen chloride is so soluble special care has to be taken in making the solution. If an ordinary delivery tube were dipped into water, the water would rapidly rise up the tube as the gas dissolves and soon water would enter the flask containing the reaction mixture. As hot concentrated sulfuric acid is used in this preparation, the admission of cold water to the flask would be dangerous.

One method of dissolving the gas is illustrated in Fig 2. The open end of the inverted funnel dips into the water. As hydrogen chloride reaches the funnel, water rises up inside it, but cannot go very far as the liquid seal is broken, so causing the water to fall back.