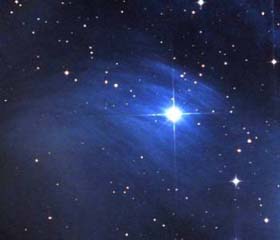 The Merope Nebula (NGC 1435) is the most conspicuous of the reflection nebulae in the Pleiades. It was discovered by Wilhelm Tempel in 1859 and is sometimes called Tempel's Nebula. Within it is a small bright knot, IC 349, discovered by Edward E. Barnard in 1890 (and thus also known as Barnard's Merope Nebula), located just 0.06 light-year away from Merope – the star that is the cause of its illumination. Long thought to be the remnant of the Pleiades birth, the Merope Nebula is now known to be a chance occurrence, as the cluster is merely passing through an interstellar cloud; in fact, the cluster leaves a wake.