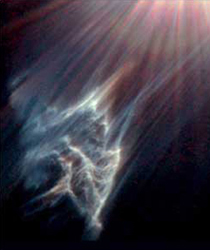 IC 349 (Barnard's Merope Nebula) is a small, bright extension of the Merope Nebula (NGC 1435) in the Pleiades star cluster. IC 349 lies 36 arcsec (corresponding to a linear distance of about 0.06 light-year or 3,500 times the Earth-Sun distance) to the southeast position angle 165°) of Merope. This small reflection nebula first discovered by E. E. Barnard in 1890 and is also referred to as Barnard's Merope Nebula.

In the 1999 Hubble Space Telescope image shown here, Merope itself is just outside the frame on the upper right. The colorful rays of light at the upper right, pointing back to the star, are an optical phenomenon produced within the telescope, and are not real. However, the remarkable parallel wisps extending from lower left to upper right are genuine features, seen for the first time.