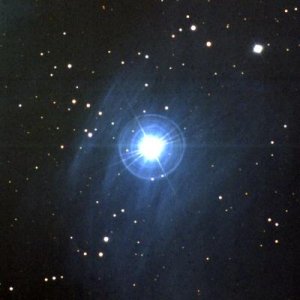 Merope (23 Tauri) is a subgiant B star in the constellation Taurus that is the fifth brightest star in the Pleiades. Like some other members in the cluster, Merope is a Be star, its rapid rotation (with an equatorial speed at least 140 times that of the Sun) flinging out a disk of bright, emitting gas (though Merope's disk is quite thin compared with others such as that of Pleione). Merope's greatest claim to fame, however, is not the star itself, but its surroundings: the reflection nebulosity for which the Pleiades is well known is so bright around Merope as to have its own names, the Merope Nebula and IC 349.