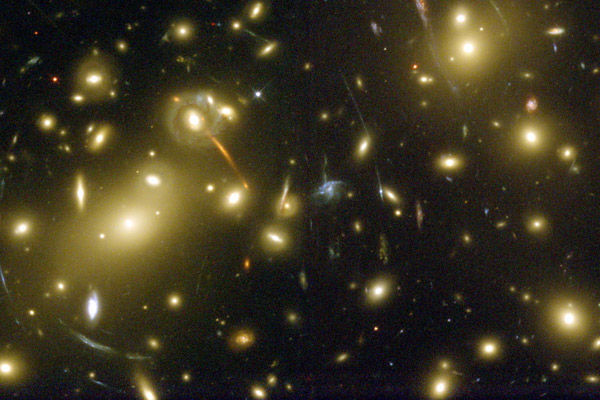 Abell 2218: a cluster of galaxies about 3 billion light-years away in the constellation Draco.

An Abell cluster is a rich cluster of galaxies (having many members within a relatively compact region of space) identified in the Abell Catalog of Rich Clusters of Galaxies, which was the first comprehensive catalogue of clusters of galaxies and, in its extended form, is still the largest. The Abell Catalog was first published in 1958 by the American astronomer George Abell (1927–1983), a graduate student at the time, and contained 2,712 clusters of galaxies north of declination -27° identified by Abell from his analysis of the Palomar Observatory Sky Survey photographs.

To be included in the catalogue, a galaxy cluster had to have at least 50 members in the magnitude range m3 to m3+2, where m3 is the magnitude of the third brightest cluster member, within a radius of about 1.5 megaparsecs (just under 5 million light-years). Abell classified such clusters as regular and irregular, and ranked them on six-point scales according to both their richness (population density) and distance (1 to 6, for closest to furthest). The Catalog proved of seminal importance to extragalactic astronomy, leading to a better understanding of the nature and properties of clusters of galaxies, and the identification of superclusters and large-scale structure.