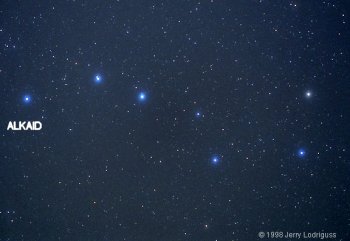 Alkaid (Eta Ursae Majoris) is the second brightest star in the constellation Ursa Major and the end star in the handle of the Big Dipper (Plough). Its name (alternatively given as "Benetnasch") is a contraction of the phrase Ka'id Banat al Na'ash meaning "chief mourner of the daughters of Al Na'ash"; (the latter represented by stars in the Dipper's handle) that stand by a funeral bier made of the Dipper's bowl.

Alkaid is just below the temperature limit at which stars generate strong X-rays because of shock waves in their winds. Unlike the other members of the Big Dipper asterism, Alkaid does not belong to the Ursa Major moving cluster.