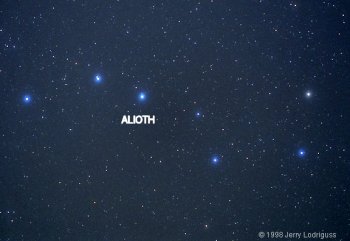 Alioth (Epsilon Ursae Majoris) is the brightest star in the constellation Ursa Major and the third star from the end of the Big Dipper's handle; its proper name comes from a corruption of the Arabic for "black horse."

Alioth is the brightest Ap star and is also an Alpha2 Canum Venaticorum star with a period of 5.1 days. Its oxygen abundance is 100,000 times greater near the magnetic equator than near the magnetic poles (which are displaced from the rotational equator and poles); the amount of chromium varies similarly. Though visually the brightest Ap star, Alioth has one of the weakest magnetic fields of this class – 15 times weaker than that observed for Cor Caroli.