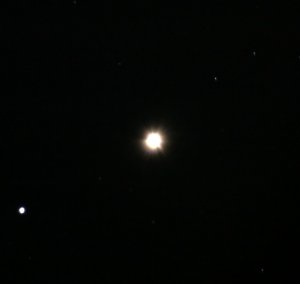 Dubhe (Alpha Ursae Majoris) is the second brightest star in the constellation Ursa Major. It lies at the front of the Big Dipper's bowl and with Merak (Beta UMa) makes the famed Pointers. Its name comes from the Arabic phrase thur al Dubbal Akbar, "the back of the Great Bear."

Unlike the middle five stars of the Big Dipper, Dubhe is not part of the Ursa Major Moving Cluster, and as a giant K star with a temperature of 4,500 K, it is much cooler than its A-type constellation neighbors, more evolved (in the core helium-burning stage), and noticeably orange in color.

Dubhe is orbited every 44 years at a distance of about 23 AU by a warmer, much dimmer, and less massive class F star. Over 400 times farther away is another F star that also has a companion (with a 6-day period), making Dubhe a quadruple system.