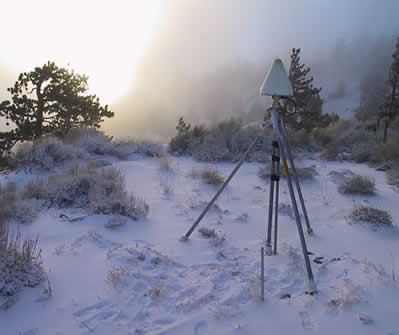 Geodesy is the science of determining the size and shape of the Earth and the precise location of points on its surface. The first recorded measurement of the Earth's circumference that approximates to the correct value was that of Eratosthenes in the 3rd century BC. Modern geodesists use not only the techniques of surveying but also information received from the observations of geodesy satellites.

Mean sea-level is the average sea-level between tides and is taken as the base level when measuring altitudes. It is always perpendicular to the force of gravity. Such a surface, taken all over the Earth is known as the geoid, which is what the Earth's true shape is called. The surface of the geoid is irregular because the gravity field varies locally and depends on the type of rocks in the crust. A large ore body or mountain chain will deflect a nearby plumbline away from the center of the Earth and thus the geoid's shape is obtained by directly measuring gravity on land or its varation at sea, where wave motion precludes direct measurement. Perturbations of artificial satellite orbits are now extensively used for broad-scale geoid studies. The shape of the geoid is defined by its departure from a "reference ellipsoid" which fits most closely to the shape of the Earth; in this case, the average level of the land and sea is taken as the norm. Mountains are then higher and sea-floors lower than the surface of this ellipsoid. (An ellipsoid is the regular geometric shape obtained by revolving an ellipse round one of its axes.)