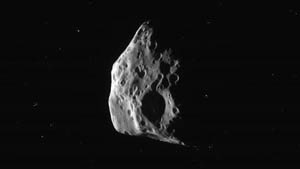 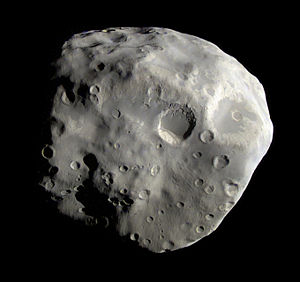 South polar region of Epimetheus taken on December 3, 2007 by Cassini from a distance of 37,400 km. The view shows what might be the remains of a large impact crater covering most of this face, and which could be responsible for the somewhat flattened shape of the southern part of Epimetheus. Also visible are two types of terrain: darker, smoother areas, and brighter, slightly more yellowish, fractured terrain. One interpretation of this image is that the darker material evidently moves down slopes, and probably has a lower ice content than the brighter material, which appears more like bedrock. Nonetheless, materials in both terrains are likely to be rich in water ice.

Epimetheus is an inner moon of Saturn. It was discovered in 1980 from photos taken by Voyager 1 and is also known as Saturn XI.

Epimetheus is located between Saturn's F- and G-rings and shares the same orbit as Janus. Normally separated by about 50 km, every 4 years these two satellites approach each other, exchange a small amount of momentum, and swap places. It is possible that they formed from the break-up of a single parent object.

The surface of Epimetheus reveals a number of valleys, grooves, and ridges, and extensive cratering, with several craters more than 30 km (19 miles) in diameter.