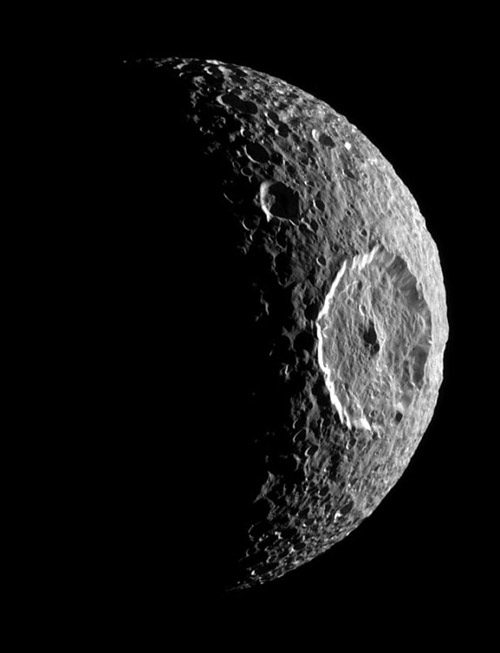 Mimas seen by Cassini. Prominent is the crater Herschel with its giant central peak. 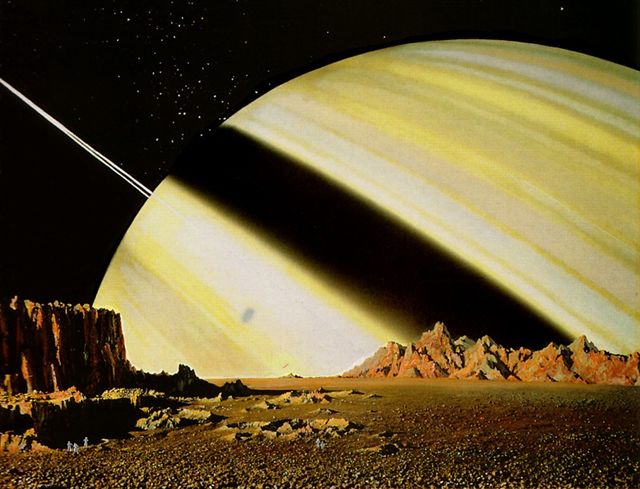 The surface of Mimas with Saturn in the sky as portrayed by space artist Chesley Bonestell.

Mimas is a moon of Saturn, discovered on Sep 17, 1789, by William Herschel. It is also known as Saturn I because it was the innermost of the seven moons of Saturn known when this numbering system was adopted. In Greek mythology, Mimas was a Titan, a son of Gaia, who was slain by Hercules.

Mimas holds the record of being the smallest object known that is more or less spherical in shape because of its own gravitational pull.

The low density of Mimas suggests a composition that is primarily water ice. It is heavily cratered, although the cratering is not uniform. While most of the surface is covered with craters up to and exceeding 40 km (25 mi) in diameter, in the southern polar region craters larger than 20 km (12 mi) are generally absent.

Preeminent is the crater Herschel which, at 130 km (80 mi) across, spans more than one third the diameter of the whole moon, and has a central peak that rises 6 km (4 mi) above the crater floor. Had the impact that caused it been much bigger, it may have split Mimas apart. As it is, traces of fracture marks are evident on the opposite hemisphere. Most of the other craters on Mimas are named after characters in Camelot.

From a distance, the satellite bears a striking resemblance to the Death Star in the Star Wars films.


an ocean inside Mimas?

It has been found that Mimas wobbles back and forth, or librates, as it orbits around Saturn – more than expected if it is simply a rock-ice body with a small round core. The team of astronomers who announced this discovery in 2014 have theorized that there are two plausible explanations for this. The first is that Mimas has an elongated core, one that is shaped like a rugby ball or American football. The other, which they consider more,likely, is that Mimas has a global ocean of water under its surface, which is free to move independently of the solid portions of the moon.