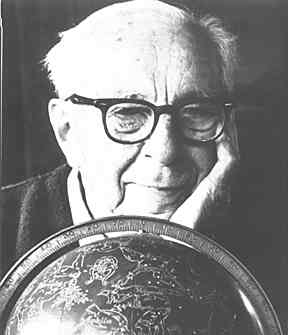 Chesley Bonestell was an American artist and architect whose imaginative and technically authentic depictions of spacecraft and other worlds had a powerful effect on people in the decade before the start of the Space Age. Bonestell's interest in astronomy began when at ten he read about Laplace's nebular hypothesis. After World War I he worked as a special artist on the Illustrated London News and on London evening papers. He returned to the United States in 1927 and worked for some years in New York and San Francisco as an architectural artist. He made architectural contributions to the Golden Gate Bridge in San Francisco and the Chrysler Building in Chicago.

From 1944 on, Bonestell mostly worked in space art and illustrated numerous books such as Willy Ley's Conquest of Space and articles such as Wernher von Braun's articles for the Collier's magazine series on space flight in the 1950s (see Collier's space program. He also illustrated space sets for science fiction films such as Destination Moon (1950), When Worlds Collide (1951), and The Conquest of Space (1955). Although his artwork appeared at a time when space travel was primarily a subject of fiction, Bonestell used scientific fact and photographic realism to create paintings that offered a believable, plausible, and highly alluring vision of our Solar System. In von Braun's words: "Chesley Bonestell's pictures ... present the most accurate portrayal of those faraway heavenly bodies that modern science can offer."