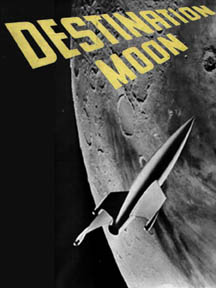 Destination Moon is a 1950 film directed by George Pal that depicts the first Moon landing – 19 years ahead of the real event. It single-handedly started the boom in science fiction movies of that decade, including Pal's own When Worlds Collide (1951), War of the Worlds (1953), and The Conquest of Space (1955). It was loosely based on Robert Heinlein's book Rocketship Galileo (1947).

Although not memorable for its quality of acting or pace of action, Destination Moon revealed an extraordinary optimism about the prospects for the Space Age, and showed, too, how far scientific and technical knowledge had progressed since the days of Melies' Le Voyage Dans la Lunes and Lang's Die Frau Im Mond (Woman in the Moon). The realism of the film was aided by Chesley Bonestell's stunning artwork. Robert Heinlein and Hermann Oberth (who had also worked on Lang's film) served as technical advisors. Although art director Ernest Fergte's impressively fissured lunar surface has since been proved inaccurate, Heinlein's nuclear-powered rocket is still more advanced than anything that has actually been built, and the zero-gravity scenes are remarkable convincing, using techniques that Stanley Kubrick drew on in 2001: A Space Odyssey.

Destination Moon was also perhaps the first movie to realistically not have sounds in the vacuum of space. In particular whenever something was dropped onto the lunar surface, such as a ladder or oxygen tank, this happened in complete silence. The only sounds heard while on the Moon, or external to the rocket was it was traveling through space, were those that came over the crews' suit radios.