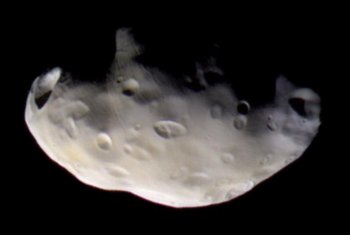 Image of Pandora by Cassini.

Pandora is one of the inner moons of Saturn and the outer shepherd moon for the F-ring. It was discovered in 1980 from Voyager 1 photos and is also known as Saturn XVII.

Pandora is heavily cratered and, as revealed by the Cassini probe during its passage of the moon at a distance of 52,000 km on September 5, 2005, there are small grooves and ridges in the dust-fine icy material that has collected over the craters. The two largest craters identified measure about 30 km (19 mi) across.

Pandora and Prometheus, the inner shepherd of the F-ring, both follow chaotic orbits as a result of their gravitational interaction. Each time Pandora passes inside Prometheus, which happens about every 28 days, the two moons give each other a gravitational kick. Because neither moon's orbit is quite circular, the distance between them on those occasions – hence the strength of the kick - varies. The perturbations lead to changes in motion that are not periodic or predictable. This is the first observation ever of chaotic orbital motions in the Solar System. A larger moon of Saturn, Hyperion, had earlier been found to have chaotic rotation around its axis.