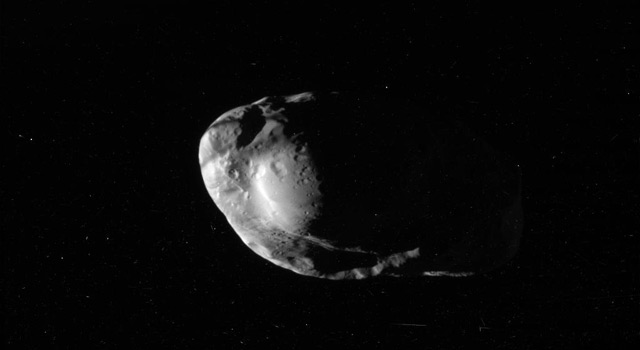 Prometheus is one of the small, inner moons of Saturn. It was discovered in 1980 from photos taken by Voyager 1 and is also known as Saturn XVI.

Prometheus and Pandora act as shepherd moons for the inner edge of Saturn's F-ring. Prometheus is extremely elongated and has a number of ridges and valleys on its northern side. Although craters up to 20 km (12 mi) wide mark its icy surface, it appears to be less heavily cratered than its neighboring moons Pandora, Janus, and Epimetheus. Its low estimated density suggests that it may be a porous, icy body.


Prometheus is a volcano on Io known as the Jovian moon's "Old Faithful." Prometheus has been active during every observation of it since it was first seen by Voyager 1, though its plume, which is 80 km tall, has migrated about 85 km to the west.