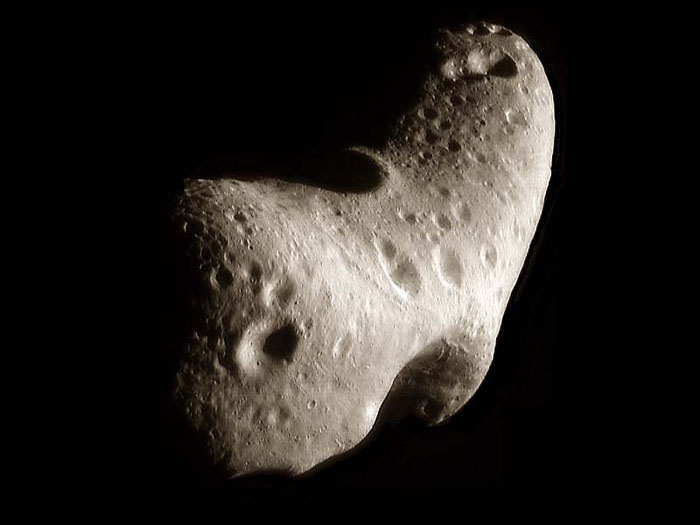 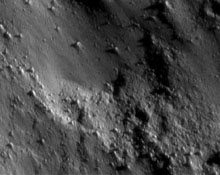 433 Eros was the first near-Earth asteroid to be found and is the second-largest one known. It was discovered in 1898 by the German astronomer Gustav Witt (1866–1946), director of the Urania Observatory in Berlin, and independently on the same day by the French astronomer Auguste Charlois (1864–1910) in Nice.

Eros is an S-type asteroid. As a member of the Amor group, Eros moves in an orbit that crosses the orbit of Mars but does not intersect that of Earth, so there is no danger of it colliding with us. It came about as close as it ever gets on January 23, 1975, when its distance was about 0.15 AU (22 million km).

A 90-kg person on Earth would weigh about 60 g on Eros, and a rock thrown from the surface at 10 m/s (about a quarter the speed of a top pitcher's fast-ball) would escape into space. Although gravity on Eros is very weak it is strong enough to hold a spacecraft in orbit, as demonstrated when NEAR-Shoemaker entered orbit in February 2000. NEAR-Shoemaker spent a year circling around the asteroid, sending back 160,000 pictures, and spotting more than 100,000 craters, about a million house-sized (or bigger) boulders, and a layer of debris resulting from a long history of impacts. Finally, on February 12, 2001, the little probe – never designed to land – descended to the surface, returning its last image from a height of just 120 m, before touching down.