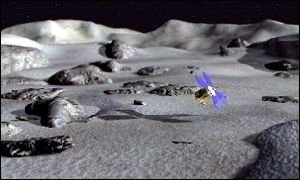 NEAR-Shoemaker about to touch down.

NEAR-Shoemaker was the first spacecraft to orbit and (though this was not originally planned) to land on an asteroid – Eros. Built and operated by the Applied Physics Laboratory at Johns Hopkins University, the probe was originally known simply as NEAR (Near-Earth Asteroid Rendezvous), but was renamed NEAR-Shoemaker in memory of the American geologist Eugene Shoemaker (1928–1997). It was the inaugural mission in NASA's Discovery Program and the first probe powered by solar cells to operate beyond the orbit of Mars.

On Jun 27, 1997, NEAR-Shoemaker flew by the asteroid 253 Mathilde at a distance of 1,200 km and found it to be composed of extremely dark material with many large impact craters, including one about 9 km deep. A deep-space maneuver in Jul 1997 brought the probe back around Earth on Jan 23, 1998, for a gravity assist that put the spacecraft on course for its rendezvous with the Manhattan-sized asteroid 433 Eros.

NEAR's instruments included a multispectral imager, a telescope with a CCD (charge-coupled device) array to determine the size, shape, and spin characteristics of the asteroid and to map its the surface; an X-ray/gamma-ray spectrometer to determine the surface/near-surface elemental composition; a near-infrared spectrometer to map the mineralogical composition; a magnetometer to measure the magnetic field of Eros; and a laser altimeter to measure the distance between the spacecraft and the asteroid's surface.

NEAR entered an orbit of 323 × 370 km around Eros on Feb 14, 2000, then moved to gradually smaller orbits over the next year or so, returning a total of 160,000 images. During the final days of its mission, NEAR maneuvered to within 24 km and then, against all the odds, became the first spacecraft actually to land on an asteroid. NEAR-Shoemaker was only designed to orbit Eros. But with all of its objectives fulfilled, it was decided to try to bring the craft in for what mission controllers called a "controlled crash". In the final moments before it landed on Feb 12, 2001, NEAR returned pictures showing surface details as small as a few tens of cm across. Finally, in one of the great moments of space exploration, the probe touched down so smoothly that its radio beacon continued to send out a signal from its new home.