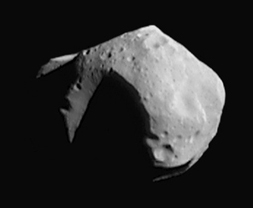 253 Mathilde is a main-belt asteroid, discovered by Johann Palisa, that was flown past at close range, on Jun 27, 1997, by the NEAR-Shoemaker probe on its way to Eros. Not only is Mathilde one of the slowest spinning asteroids (only 1220 Clocus and 288 Glauke have longer rotational periods), but it is also one of the blackest objects in the Solar System – twice as dark as chunk of charcoal – reflecting only 3% of the light that strikes it. Its surface has a spectroscopic signature the same as that of carbonaceous chondrites, whose typical density is about 2 g/cm3. The fact that Mathilde has a much lower density than this suggests that it is a rubble-pile asteroid made of big chunks with large voids in between, or lots of loose, smaller pieces, like gravel.