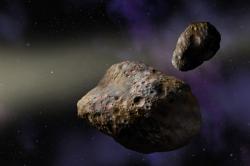 617 Patroclus was the second Jovian trojan to be discovered, by August Kopff in 1906. Patroclus lies at Jupiter's trailing Lagrangian point (L5). It is the only trojan of Jupiter in the "Trojan camp" to be named after a Greek character because the naming conventions for the Trojan asteroids were not adopted until after Patroclus was named.

In 2001 it was discovered that Patroclus is actually a binary asteroid. The larger component retains the name Patroclus while the smaller has been named Menoetius, with the provisional designation S/2001 (617) 1.

In January 2006 it was announced that Patroclus and Menoetius are more likely to be dirt-covered ice balls than rocky rubble piles, as previously supposed. This interpretation supports a theory put forward in 2005 that the Trojans are effectively frozen comets captured by Jupiter some 650 million years after the giant planets formed.1