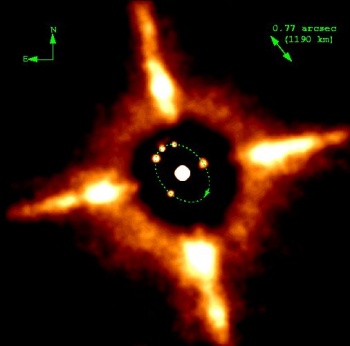 45 Eugenia is a main-belt asteroid around which, in 1998, a satellite was discovered – the first such discovery using a ground-based telescope. The little moon, named Petit-Prince travels around Eugenia in a 5-day circular orbit at a distance of about 1,190 km. The orbit of the moon yields the mass of the main asteroid and hence its density, which turns out to be surprisingly low – only about 1.2 times that of water. Two possible explanations exist for this low density: either the asteroid is made mostly of ice, or it is made of rocks with big gaps in between. Because most asteroids, including Eugenia, are very dark, they cannot have icy surfaces. Eugenia might, however, be the burned-out remains of a comet, with a dark coating and an icy interior. The more popular view, though, is that it is a rubble-pile asteroid – a highly porous jumble of fairly loose rocks.

Petit-Prince is a satellite of Eugenia that was discovered in 1998 by astronomers using the Canada-France-Hawaii Telescope. Petit-Prince was named in 2003 after Antoine de Saint-Exupéry's character The Little Prince, who was in turn based on the Prince Imperial, son of Empress Eugenia. The name is especially apt since The Little Prince in the novel lives on an asteroid.

Petit-Prince is 13 km in diameter, compared to 45 Eugenia's 226 km, and takes five days to complete an orbit of its primary. It was the first asteroidal moon to be discovered by a ground-based telescope. Previously, the only known moon of an asteroid was Dactyl.