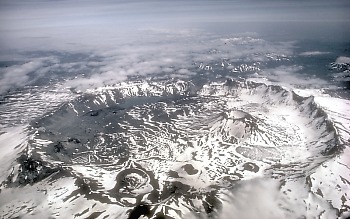 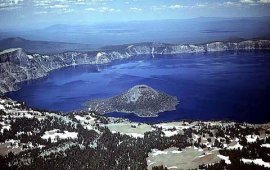 A caldera is a large (wider than about 1.5 km), usually circular depression at the summit of a volcano formed when magma is withdrawn or erupted from a shallow underground magma reservoir (Fig 1). The removal of large volumes of magma may result in loss of structural support for the overlying rock, thereby leading to collapse of the ground and formation of a large depression. Crater Lake in the American Cascades is a good example (Fig 2).

Calderas are different from craters, which are (usually) smaller, circular depressions created primarily by explosive excavation of rock during eruptions.

The word is Spanish for "cauldron."

More than 1,300 episodes of unrest (earthquakes, ground deformation, change in fumarole activity, or eruptions) have occurred at 138 calderas greater than 5 kilometers in diameter during historical time.

In a typical year some form of unrest occurs at about 18 large calderas worldwide, and eruptions occur within or near at least five of them.

The largest eruption of the twentieth century from the Novarupta vent in the Valley of 10,000 Smokes of Alaska, ejected about 12 km3 of magma and resulted in the formation of a caldera 3 km across. Amazingly, the caldera collapse didn't occur at the eruption vent, but 10 km away at Katmai, a stratovolcano. Apparently magma drained away from Katmai's magma reservoir to Novarupta's erupting vent.

Yellowstone National Park consists of three enormous calderas that erupted about 2, 1.2, and 0.6 million years ago. The most recent caldera is 45 km across and 75 kilometers long.

Caldera-forming eruptions are the largest eruptions on Earth. For example, the Fish Canyon eruption in southwestern Colorado (United States) about 28 million years ago erupted more than 5,000 km3 of magma from La Garita caldera. That's enough magma to bury the entire state of California to a depth of nearly 12 meters.

Some of the largest calderas in the solar system are found on Mars, notably that of Olympus Mons. Other large examples occur on Venus.

A crater lake is an accumulation of water, usually by precipitation of rain or snow but sometimes ground water, in a volcanic crater (caldera). Should an eruption occur, the resulting mudflow (lahar) is often more destructive than a lava flow owing to its greater speed. A noted example is Crater Lake, in Crater Lake Park, Oregon). The waters of the lake were formed by precipitation and are maintained solely by rain and snow; there is no outlet.