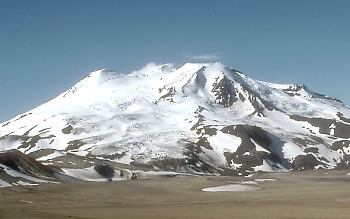 A stratovolcano is a steep, conical volcano built by the eruption of viscous lava flows, tephra, and pyroclastic flows. Usually constructed over a period of tens to hundreds of thousands of years, stratovolcanoes may erupt a variety of magma types, including basalt, andesite, dacite, and rhyolite. All but basalt commonly generate highly explosive eruptions. A stratovolcano typically consists of many separate vents, some of which may have erupted cinder cones and domes on the volcano's flanks. A synonym is composite cone.