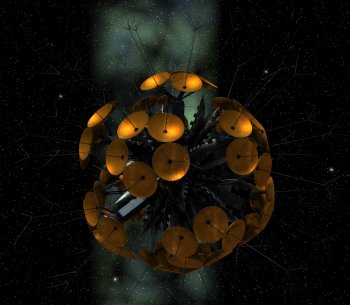 Bracewell probes are hypothetical automated spacecraft sent out by advanced technological races with the object of making contact and exchanging information with other intelligent beings in the Galaxy. They are named after Ronald Bracewell who first discussed their possibility in 1960.1 Bracewell argued that interstellar "messenger probes", as he called them, offered an attractive alternative to the conventional SETI approach of listening for extraterrestrial signals and, if successful, engaging in a slow dialogue across many light-years.

As originally conceived, Bracewell probes, powered by high-speed propulsion units for interstellar travel, and autonomously controlled by computers with a high degree of artificial intelligence, would be dispatched toward star systems that had been earmarked as biologically interesting. Upon arrival at a target star, a Bracewell probe would enter a near-circular orbit in the middle of the star's habitable zone and in the same plane as its planetary system. This would ideally place it to make contact with any intelligent, technological residents. Having powered up its instruments, using light harvested from the host star, it would scan for narrow-band radio transmissions indicative of an artificial origin. If any were found, it would record them, identify their source, and broadcast their contents back unaltered in order to draw attention to itself. This would allow the existence and location of the probe to be established, and a subsequent dialogue to be conducted.

The use of messenger probes, Bracewell pointed out, offers a number of advantages over the strategy of searching for interstellar signals and subsequently trying to carry out a remote conversation (see CETI). A probe in situ could deliver a far more powerful signal to target worlds than could a transmitter positioned many light-years away, so that its chance of being noticed would be that much greater. It would also not have to rely on potential recipients continuously monitoring a large number of stars. If necessary, it could bide its time while a species evolved to roughly the stage we are at now (see sentinel hypothesis). If its ploy of echoing local radio transmissions were not immediately successful, it could try beaming a message of its own across a wider frequency range. Once it had established contact, its other great strength would come into play; that is, the conversation with the contact race could be carried out virtually in real-time. Using its onboard intelligence and memory store, the probe could pass on a vast amount of information about its origins and the civilization which had sent it, without the need to wait many years for an exchange of greetings across the interstellar void. If it were large enough, it could even carry artifacts, including gifts, devices, and objet d'art.

Preliminary telescopic searches for Bracewell probes were carried out at Kitt Peak National Observatory and Leuschner Observatory. Among the sites regarded as most promising for scrutiny are the Earth-Moon Lagrangian points and other similar stable orbital regions in the Solar System. These locations are analogous to favored radio frequencies in traditional SETI, such as the 21-centimeter line and the waterhole. In 1974, Duncan Lunan hypothesized that a Bracewell probe was responsible for long-delay echoes, first reported in the 1920s.

Civilizations like ours which have learned how to carry out interplanetary missions may quickly go on to acquire the ability to launch artificially intelligent robot spacecraft to nearby stars at reasonable speeds. Indeed, since Bracewell first suggested the idea of messenger probes, rapid progress has been made in a number of relevant technological fields, including robotics, information storage, and spacecraft propulsion. These developments are bringing closer the time when we may be able to send out Bracewell probes of our own, a subject dealt with fictionally by Michael McCollum in his LifeProbe2 (1983).

More recently, Bracewell has suggested that it would be sufficient merely for a messenger probe to pass through a planetary system to achieve its goals (as in the case of Project Daedalus). Without the need for retrorockets, such a probe could be made smaller and at much lower cost. Our contribution to the success of attempts by alien races to establish contact in this way might be to construct a sophisticated space watch system, possibly an extension of one designed to search for near-Earth objects.

Introductory paragraph: Since Morrison and Cocconi published the suggestion that there might be advanced societies elsewhere in the Galaxy, superior to ourselves in technological development, who are beaming transmissions at us on a frequency of 1,420 MHz/s., Drake has described equipment under construction to look for such transmissions. The confidence necessary to commence actual observations is based on an opinion that planets are a common by-product of the formation of starts. One argument among others is that stars of spectral type later than F5 have low angular momenta, just as the Sun has; and in the case of the Sun we know that it is because the momentum (98 per cent of it) resides in planets. Of the thousands of millions of planets in the Galaxy likely to be situated similarly to the Earth in relation to their star, it is hard to dismiss the possibility that some have more advanced civilizations than ours. In view of the acceleration with which technology develops, advanced societies could be incredibly more advanced. 2.McCollum, Michael. LifeProbe. New York: Ballantine Books (1983). 3. Bracewell, Ronald N. "The Opening Message from an Extraterrestrial Probe." Astronautics & Astronautics, 11, 58-60 (May, 1973).