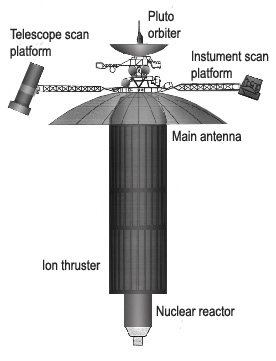 Diagram of one possible configuration of TAU.

TAU (Thousand Astronomical Unit) mission is an interstellar precursor mission concept, studied by JPL scientists in the late 1980s, with the potential for enabling an unmanned probe to reach a distance of 1,000 astronomical units (AU) (0.016 light years) within a 50-year trip time. TAU would be powered by a nuclear reactor in the 1-MWe class with a specific mass of 12.5 kg/kWe and a full-power operating (thrusting) time of 10 years. RTG power supplies would provide power for the science instruments for the 40-year cruise portion of the mission (after reactor and propulsion system burn-out and jettison). The electric thrusters required would have a specific impulse (Isp of 10,000-20,000 lbf-s/lbm) and a burn time (per thruster) of 2 years, as might be available from advanced ion thrusters. The propellant would be xenon (see XIPS). The propulsion system (ion thrusters, power processor units, etc.) specific mass would be 4 kg/kWe.

The primary science objective of the mission is to measure directly the distance to stars throughout our galaxy using stellar parallax. Secondary science objectives include particles and fields measurements, a search for the heliopause, a search for the Oort Cloud, tests of gravitational effects based on changes to the spacecraft's trajectory (which could be caused by a tenth planet or other "dark" companions of the solar system), and tests of general relativity (such as using the optical communications link with the spacecraft as a long-baseline gravity wave detector).