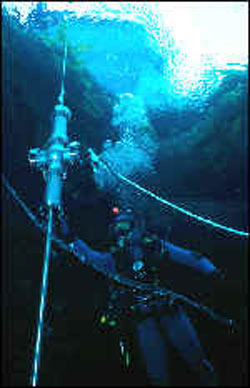 The Lo'ihi Underwater Volcanic Vent Mission Probe is an instrumented underwater probe, built at the Jet Propulsion Laboratory, to examine deep, hydrothermal vents at the Lo'ihi Seamount, 27 km (20 mi) east of the Big Island of Hawaii at a depth of about 1,300 m (4,250 ft). A long-term objective of JPL engineers is to develop instruments for a probe that could be used to search for life in the underground oceans that may exist on Jupiter's moons, Europa and Callisto.

The sensor end of the Lo'ihi probe, designed to withstand temperatures up to 400°C (750°F), contains a sophisticated thermometer and windows made of tough, heat-tolerant sapphire through which lights can be shone to illuminate the ocean floor. Images travel from the windows, up through fiber-optic rods to cameras mounted, together with other heat-sensitive electronic components, at the other end of the probe. Preliminary tests were carried out, in August 1998, in the giant kelp forest exhibit at the Monterey Bay Aquarium in California. On 17 October 1998, a submersible from the University of Hawaii took the 52-kg (115-lb) probe down to the Lo'ihi Seamount. The probe was controlled from the sub using a laptop computer. Following the success of this mission, it is planned to add an ultraviolet camera (for imaging organic matter) and a sensor to detect chemicals used by microbes in the vicinity of undersea vents to generate energy. The information gathered from experiments off Hawaii will be used to prepare for more challenging terrestrial investigations, including studies of a giant sub-ice lake in Antarctica (see Vostok, Lake), which will precede any explorations of oceans on other worlds.