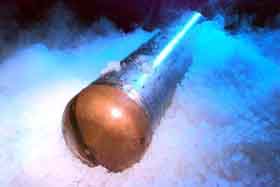 A cryobot is a long, pencil-shaped probe with a heated tip that can melt its way down through a thick layer of ice and deploy equipment for returning data from any watery environment that may lie below. Such devices will be used to explore Lake Vostok and, eventually, the sub-ice ocean hypothesized to exist on Europa and some other large moons in the Solar System. Having penetrated through to the bottom of the ice crust, cryobots on these missions will release two principal devices for operating at interfaces where life might be expected to occur: an ice-water interface station, which will monitor conditions at the top of the watery sea, and a sediment exploration station, which will descend to the sea-floor. The latter will also release a hydrobot which will rise like a bubble to the top of the sub-ice sea, taking measurements and searching for signs of life as it goes.