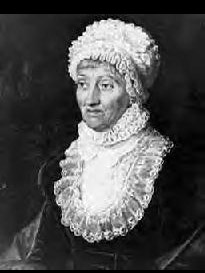 Caroline Herschel was a German astronomer and one of the first female astronomers to be recognized for her work. Sister of William Herschel and aunt of John Herschel, she was born in Hanover and raised to be the household servant, with little education. Her mother believed that it was her daughter's duty to look after her brothers, while her father, a musician in the Hanoverian Guards, included her in music lessons given to his sons but warned her against any thoughts of marriage because she wasn't good looking or rich and, therefore, couldn't expect an offer.

After her father's death, William persuaded his mother to let Caroline join him in Bath, England. So in 1772, she went, but only after William paid for a servant to replace her at home. Following a brief career as an oratorio singer, she joined William in astronomical work. She became her brother's assistant, pounding and sieving horse manure to make material for telescope mirror molds, and polishing the metal mirrors themselves. She recorded data, prepared catalogues, and wrote papers for publication. In 1783, she began to search for comets and discovered three new nebulae. Between 1786 and 1797, after her discovery of eight comets, she entered the scientific limelight herself. King George III was so impressed that he awarded her £50 a year. When William was made Court Astronomer after his discovery of Uranus in 1781, Caroline was appointed the first official female assistant to this position. She also revised John Flamsteed's star catalogue and published it in 1798 as the Index of Flamsteed's Observations of the Fixed Stars.