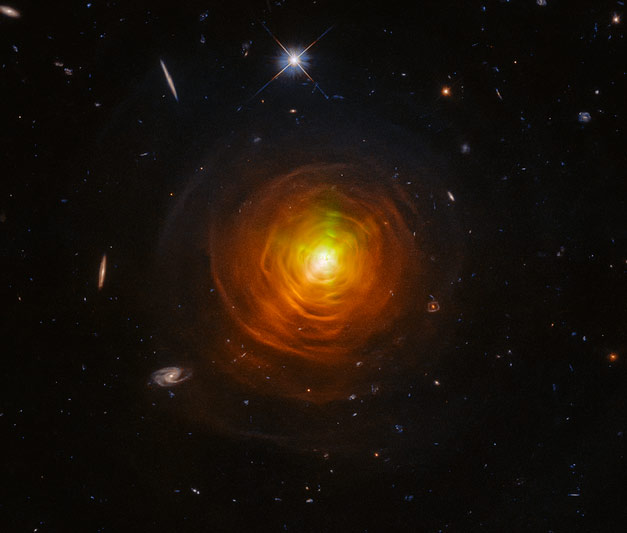 CW Leonis is the second brightest extrasolar object in the sky at an infrared wavelength of 10 microns, after Eta Carinae. Lying in the constellation Leo at a distance of about 400 light-years, It is also the closest carbon star to Earth. in addition to its variable star designation, it is catalogued as the infrared source (IRC 10°216).

Visually, an 18th magnitude long-period pulsating variable, CW Leo is an asymptotic giant branch (AGB) star. A luminous giant star, with a surface temperature of 2,330 K and a radius of about 500 solar radii, it is cocooned within a shell of gas and dust in which carbon and dozens of different types of molecules have been detected. This shell has been formed from material lost in the form of a stellar wind that is blowing at a speed of about 14.5 km/s and carrying away about 3 × 10-5 solar masses per year. CW Leo is believed to be a rare case of a protoplanetary nebula – a system in the early stages of evolving to the planetary nebula stage.

Because CW Leonis is relatively nearby, this gives astronomers the chance to understand the interplay between the star and its surrounding, turbulent envelope. The complex inner structure of shells and arcs may be shaped by the star’s magnetic field. Detailed Hubble observations of CW Leon taken over the last two decades also show the expansion of threads of ejected material around the star.

The bright beams of light radiating outwards from CW Leonis are one of the star's most intriguing features. They've changed in brightness within a 15-year period – a very short timespan in astronomical terms. Astronomers speculate that gaps in the dust shrouding CW Leonis may allow beams of starlight to pierce through and illuminate dust, like searchlight beacons through a cloudy sky. However, the exact cause of the dramatic changes in their brightness is as yet unexplained.

A star shines when the outward pressure from the fusion furnace at the core balances the inward-acting force of gravity. When the star runs out of hydrogen fuel, the persistent pull of gravity causes the star to start collapsing. As the core shrinks, the shell of plasma surrounding the core becomes hot enough to begin fusing hydrogen. In addition, pressures and temperatures in the core rise to the point to ignite helium fusion. This generates enough heat to dramatically expand the star's outer layers and swell up into a bloated red giant.