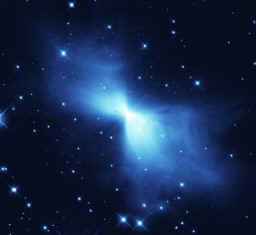 The Boomerang Nebula is a bipolar reflection nebula that lies about 5,000 light-years away in the constellation Centaurus. The symmetric cloud appears to have been created by a high-speed wind of gas and dust blowing from an aging asymptotic giant branch (AGB) star at a speed of 164 km/s. This rapid expansion has cooled carbon monoxide molecules in the nebular gas to a mere 1 K – colder even than the cosmic background radiation – making it the coldest region in the cosmos (outside a lab) ever observed. The ultracool Boomerang shines with light from the central star reflected by dust and is believed to be evolving rapidly, on a timescale of about 1,000 years, to the planetary nebula stage.