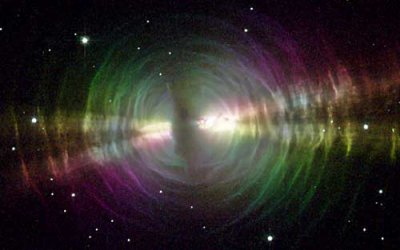 The Egg Nebula (CRL 2688) is a protoplanetary nebula in the constellation Cygnus. The central star of the Egg was a red giant until a few hundred years ago. It then began shedding its outer layers, which today are visible as a cloud of matter about 0.6 light-year across.

Observations by the Hubble Space Telescope have shown bright arcs of matter within the cloud, almost like tree-rings, that reveal the way in which the rate of mass ejection from the central star has varied throughout its recent period of mass-loss. Hubble has also shown starlight escaping in narrow, oppositely-directed beams through holes in the circumstellar cocoon. The beams may result from shadows cast by blobs of material distributed within the region of ring-like holes that are carved out by a wobbling, high-speed stream of matter. Alternatively, they may be due to starlight reflected off fine jet-like streams of matter being ejected from the center and confined to the walls of a conical region around the symmetry axis. Both theories call for the ejection of high-speed material in a narrow beam by some mechanism that isn't properly understood. Similar fine jets have been seen in the Cat's Eye Nebula.