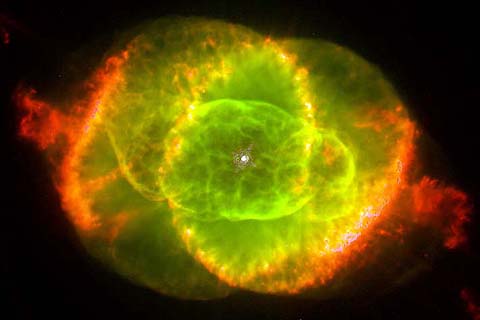 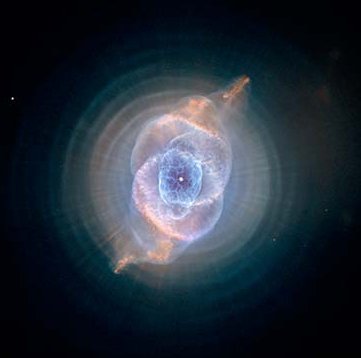 The Cat's Eye Nebula (NGC 6543) is a young planetary nebula in the constellation Draco, midway between Delta and Zeta Dra; one of the brightest objects of its type, its resemblance to a cat's eye is due to a series of gas loops that have been ejected by the central star over the past 1,000 years or so.

Historically, NGC 6543 was the first planetary to be observed with a spectroscope and to reveal the presence of emission lines. This started the controversy about whether planetaries consist of numerous stars or, as turned out to be the case, clouds of diffuse gas. An 8 cm telescope will show a foggy blue-green disk; more powerful instruments are needed to reveal the internal structure.

The great complexity of the Cat's Eye's structure, with its concentric gas shells, jets of high-speed gas, and unusual shock-induced knots of gas, has led astronomers to suggest that the central star may be a binary system. According to this idea, a fast stellar wind from the central star created the elongated shell of dense, glowing gas visible in images of the nebula. This structure is embedded within two larger gas lobes, previously blown off by the star, that are pinched by a ring of denser gas, presumably ejected along the orbital plane of the binary companion. The suspected companion star also might be responsible for a pair of high-speed jets of gas that lie at right angles to the equatorial ring. If the companion were pulling in material from a neighboring star, jets escaping along the companion's rotation axis could be produced. These jets would explain several puzzling features along the periphery of the gas lobes. The fact that the twin jets are now pointing in different directions than these features suggests that the jets are wobbling, or precessing, and turning on and off episodically.

Further astonishing detail of the Cat's Eye emerged in 2004 following the release of a new, more detailed Hubble Space Telescope image taken with Advanced Camera for Surveys (ACS). This image reveals a pattern of at least 11 concentric rings, or shells, around the inner portion of the nebula. Each ring is actually the edge of a spherical bubble seen projected onto the sky. Observations suggest the star ejected its mass in a series of pulses at 1,500-year intervals. These convulsions created dust shells, each of which contain as much mass as all of the planets in our Solar System combined.

Until recently, it was thought that such shells around planetary nebulae were rare. However, Romano Corradi (Isaac Newton Group of Telescopes, Spain) and collaborators, in a paper published in the European Journal Astronomy and Astrophysics in April 2004, argued that the formation of these rings is likely to be the rule rather than the exception.

The bull's-eye patterns seen around planetary nebulae came as a surprise to astronomers because they had no expectation of episodes of mass loss at the end of stellar lives that repeat every 1,500 years. Several explanations have been proposed, including cycles of magnetic activity somewhat similar to our own Sun's sunspot cycle, the action of companion stars orbiting around the dying star, and stellar pulsations. Another school of thought is that the material is ejected smoothly from the star, and the rings are created later on due to formation of waves in the outflowing material. Further observations and theoretical studies will be needed to decide between these and other possible explanations.

About 1,000 years ago the pattern of mass loss suddenly changed, and the Cat's Eye Nebula started forming inside the dusty shells. It has been expanding ever since, as discernible in comparing Hubble images taken in 1994, 1997, 2000, and 2002. The puzzle is what caused this dramatic change. Many aspects of the process that leads a star to lose its gaseous envelope are still poorly known, and the study of planetary nebulae is one of the few ways to recover information about these last few thousand years in the life of a Sun-like star.