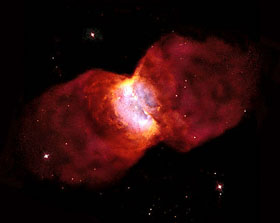 NGC 2346 is a faint bipolar planetary nebula, imaged by the Hubble Space Telescope as a beautiful butterfly-shaped object. At the heart of this nebula resides a pair of closely orbiting stars with a period of about 16 days. Millions of years ago, the more massive star expanded to become a red giant, swallowing up its companion and setting in motion a process that created this butterfly effect. As the less massive companion spiralled inward towards its massive partner, rings of gas were expelled. As the hot core of the red giant was gradually uncovered, powerful stellar winds inflated two huge bubbles of gas, producing the butterfly.

NGC 2346 was discovered by William Herschel in 1785. Fairly large though faint in an amateur telescope, it is a challenging object best seen through a nebula filter. A round glow immersed within a star speckled background becomes apparent as well as an obvious central star of magnitude 11.2 (variable).